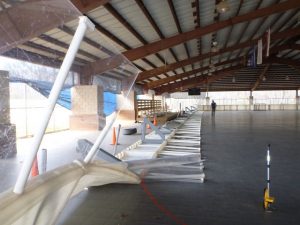 Earlier this year high winds destroyed the dasher boards at the John Alexander Memorial Park in McDonough Georgia where the McDonough Youth Roller Hockey kids practiced.  This happened just two weeks before the start of their season.  The kids and coaches were devastated and not sure what they were going to do.  The rink was unusable and unfixable.

Around that same time, the City of St. Louis Park, Minnesota was starting on a renovation project at their Recreation Center.  This renovation project’s focus was to replace their R-22 refrigerant cooling system being phased out as part of an international environmental agreement.  At the same time they had decided to replace their 19 year old dasher boards.  Becker Arena Products received the contract to remove the old boards and replace them with a brand new system.

Todd Lang, our Used Equipment Manager, connected with the people in McDonough.  After a few conversations Todd was able determine the St. Louis Park boards would work perfectly in their rink and they agreed.

To conclude the story, St. Louis Park Minnesota got new dasher boards for their facility saving money with a trade in on the old boards and the kids in McDonough Georgia are skating again.  A Win Win for all. 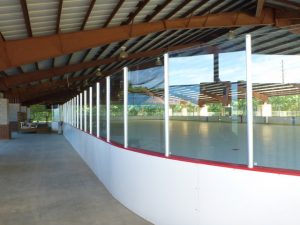 Becker Arena Products, our parent company, has been selling new ice rink equipment since 1988. In 2005 we started connecting buyers and sellers of used and refurbished ice rink equipment through a dedicated website www.RinkEquipmentResource.com